(This article was originally published on another site on my 7 year soberversary. It was difficult to reexamine this piece given the context of when I wrote the first version and where I thought I may be now. But it was important for me that this lived somewhere else. Somewhere that I owned. I’ve made a few tweaks as I reflect on my past year of sobriety.)

On June 8th, 2014, I woke up, hungover, in a Caribbean resort, wincing with hazy memories of trying to hit my husband while he held our 18-month-old daughter on what was supposed to be a nice family vacation with my in-laws.

“You couldn’t have waited until the last night to ruin the trip?” I grimly thought to myself (my drinking was a regular event-crasher at this point – like Wedding Crashers, but way less fun). My initial foray into sobriety had ended the previous May, and I had desperately spent the last year trying to prove to myself, to everyone, that I was definitely not an alcoholic, despite all evidence to the contrary.

I Wasn’t Always an Alcoholic

I didn’t always have a drinking problem…until I had a drinking problem. I wasn’t the kid who partied a lot in high school; I was extremely frightened of authority (you’re welcome mom and dad). Also, like any popular kid, I had early morning forensics tournaments and marching band practice to contend with on the weekends thank you very much. You were more likely to find me at the local diner, eating chocolate chip pancakes with my team after a tournament than at a home of a fellow classmate’s whose parents were away for the weekend. Even at college I only blacked out once and it scared the crap out of me. But something happened when I turned, ironically enough, 21. Maybe the disease caught up with me. The allergy reached fruition. The insatiable craving was calling my number and I was powerless to resist its allure. Whatever it was I gave myself to it with abandon. 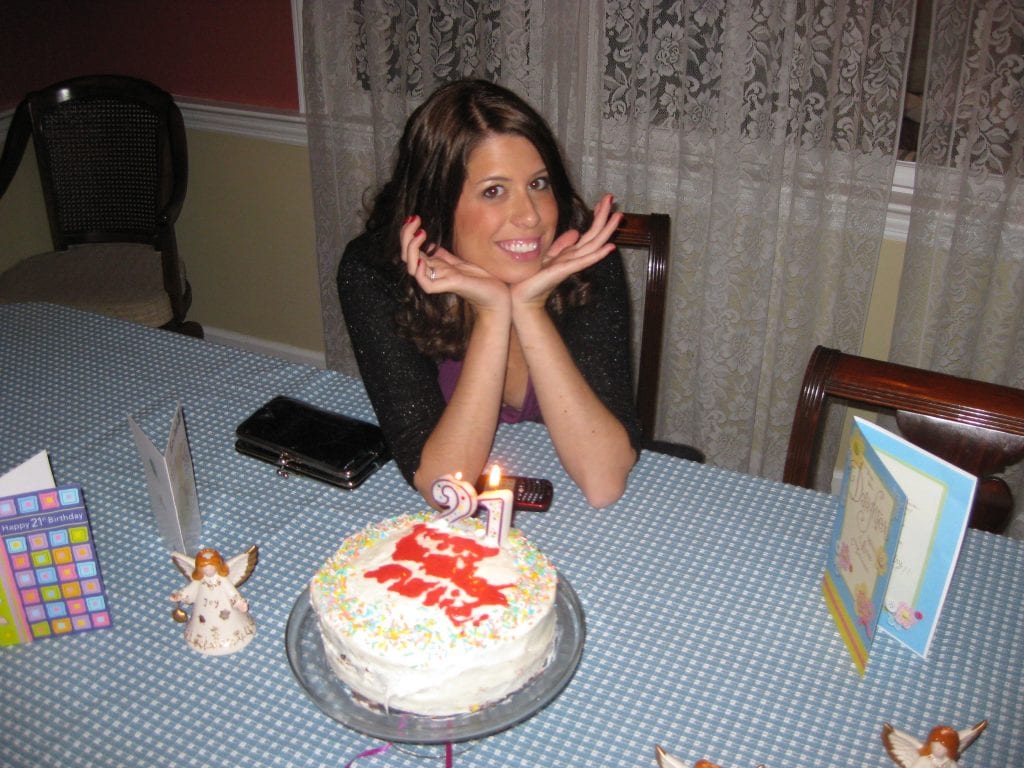 My first sober journey started in August of 2011, three months before my wedding because, truly, I pick the worst times to hit rock bottom. Fear of losing my then-fiancé and general disgust with myself forced me into Alcoholics Anonymous. AA wasn’t entirely unknown to me because of family members who worked the program. I was 23 at the time and quickly forgot I was an alcoholic (It was just college! Who doesn’t bring a G&T to a Senior Seminar disguised as coffee to present on Kipling?!). I was so sure I could handle my alcohol as a now very mature 25-year-old. I just wanted to try new things like…like Craft Beer! [Spoiler: she didn’t just want to try Craft Beer.] I also wanted to hang out with other moms and not feel isolated because I didn’t drink. I wanted to be like everyone else. I wasn’t like everyone else.

Alcoholism & My Journey to Sobriety 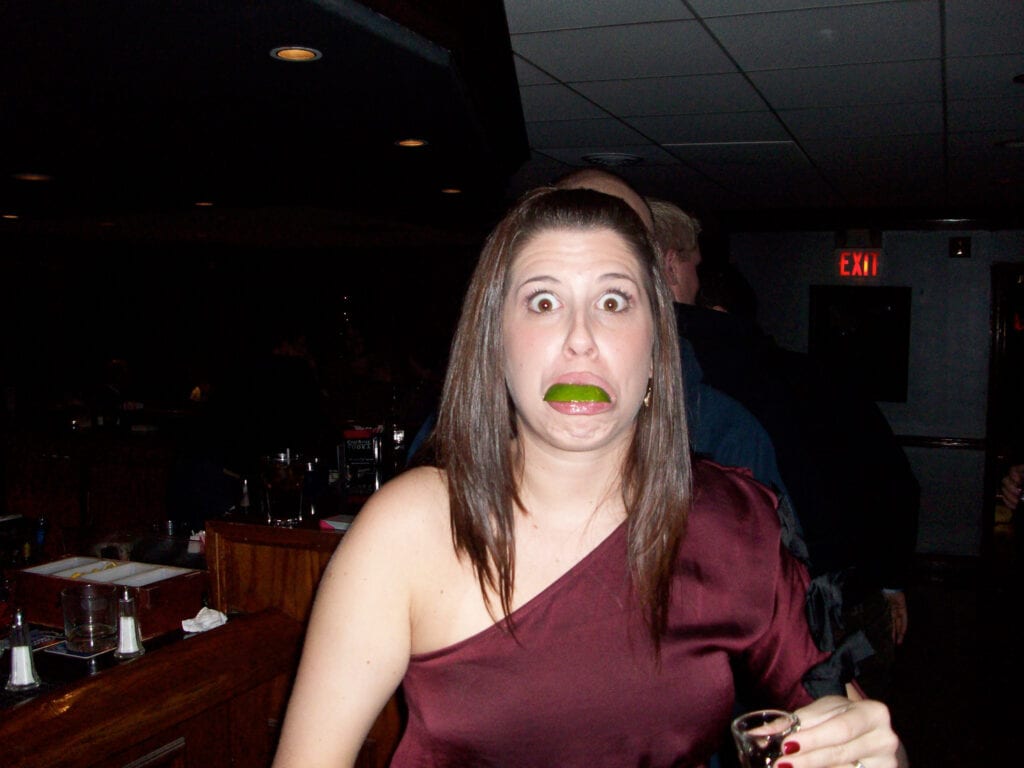 (A completely forgettable night, as most were)

I drank when I was happy. I drank when I was sad. I also just drank because I was so damn uncomfortable in my own skin. I didn’t know how to exist in the world without dulling the sharp edges. I was forever chasing that sweet spot of tipsy delirium. Inevitably I’d topple over and emerge with guilt so crushing it left me breathless. I’d wake up after one of “those nights,” roll over and try and guess–from my sleeping husband’s body language–how bad the night before had been. A clumsy reach for the phone for more evidence of how embarrassing things had gotten. I couldn’t ask because that would be admitting that I didn’t remember and that maybe I had a problem. I had become my own detective. It was the shittiest-ever game of Clue. It was Meredith, with the alcohol, all over the damn place.

On June 8th 2014, at 26-years-old, I finally admitted to my innermost self, in a hotel room, at an all-inclusive resort in the Caribbean, with my husband sleeping beside me and my daughter in a portable crib nearby, that I was an alcoholic. I was past the point of an apology tour. I couldn’t say I’d never do it again because who would believe me? I wasn’t even sure I believed me.

When I first stopped drinking, all I wanted was to stop thinking about alcohol every day, stop the drunk dreams (dreams so vivid you wake up sweating through your sheets convinced you broke your sobriety, again), and for the people close to me not to look at me with pity, anger, fear or a combination of the three. Being new in sobriety is a lot like the Wizard of Oz when suddenly everything is in technicolor. It’s louder and brighter and scarier. Temptation is everywhere. You come crashing down with the house and embark on a yellow-brick road towards home.

I can’t pinpoint when it happened, but one day, sometime during my first year of sobriety, I realized I couldn’t remember the last time I thought about alcohol. The drunk dreams ceased. I went on my first adult sober vacation with my husband and woke up at dawn to watch the sun rise in Colorado near the Sand Dunes and laughed at the fact that I was now a person who woke up early, sans hangover, on vacation for the simple pleasure of watching Mother Nature in comfortable solitude.

While I don’t fear alcohol, I know that I have a disease that doesn’t want me to believe I have a disease. Have I wished over the years that I could go to a Mom’s Night Out and have a cocktail? Or accept a glass of wine when visiting a new friend’s house? Sure. But who am I kidding? It’ll never be just one drink. One of the blessings of sobriety is finding (and attracting) friends who don’t care that I’m an alcoholic; they love me anyway. I quickly found that people generally don’t care if I drink or not (Spoiler: I’m not the center of everyone’s universe and no, people won’t assume you’re pregnant if you don’t order a drink), unless they themselves have a problem.

Although convinced on June 8th, 2014, that my life was over, I also kind of felt relieved. The jig was up. I no longer had to keep lying to those around me or myself. The secrecy and deception it requires to be an active alcoholic is exhausting. In acceptance of my addiction, there was peace. I didn’t realize how small my world had become when alcohol was the sun and I, the Earth, aimlessly spinning around it. Eight years later, my world is bigger than I could have ever imagined. I can move purposefully through life, stand in my truth, survive heartache and disappointment, fight for others without the fear of alcohol pulling me under. I can give back. I can make good trouble. I can live life on life’s terms. I can be a mom. A wife. A sister. A daughter. A good friend. I can be present.

And I can help others with my story.

I decided to write this post to share some of my story–which I know is only one story among millions–of what an alcoholic can look like. The addict or the alcoholic is not always the person experiencing homelessness, the strung-out junkie on T.V. The alcoholic is your therapist, religious leader, co-worker, homeroom mom. The alcoholic is me.

Resources: If you think you might be struggling with alcohol, here’s a link to AA with a list of meetings near you. If AA isn’t your thing, here’s a great article with alternatives to AA. I personally know people who have used SMART Recovery with success. If you love someone who is struggling with addiction, check out Al-Anon (there are also specific meetings for teens).

4 thoughts on “Hi, My Name’s Meredith and I’m an Alcoholic”